After nearly two years of researching, planning, surveying, and conducting community outreach, the Camas School Board adopted new school start times that were implemented in the fall of 2018. 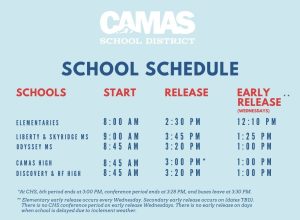 A Brief History on the Journey to Adjusting School Start Times

As a community, we have been more intentionally focused on supporting the social-emotional development and health of our students. A concern was raised by our Citizens Advisory Committee about start times and research related to sleep for our adolescent students. In the 2018/19 school year, we will add a third high school to our district, Discovery High School. Discovery will join Hayes Freedom High School as schools of choice in our district. Adding a new high school requires us to review busing routes and start times. In anticipation of Discovery High School opening in 2018, the Citizens Advisory Committee spent the 2016-17 school year researching start times and their impact on students. It is important to emphasize that the committee viewed their recommendation as what was best for the health of our students, across age and grade spans. They recognized that change is difficult, and any change impacts the comfortable familiarity of current systems and schedules. Abstracts from two of the major research documents that informed the committee’s work are included below.

The American Academy of Pediatrics recognizes insufficient sleep in adolescents as an important public health issue that significantly affects the health and safety, as well as the academic success, of our nation’s middle and high school students. Although a number of factors, including biological changes in sleep associated with puberty, lifestyle choices, and academic demands, negatively affect middle and high school students’ ability to obtain sufficient sleep, the evidence strongly implicates earlier school start times (e.g., before 8:30 AM) as a key modifiable contributor to insufficient sleep, as well as circadian rhythm disruption, in this population. Furthermore, a substantial body of research has now demonstrated that delaying school start times is an effective countermeasure to chronic sleep loss and has a wide range of potential benefits to students with regard to physical and mental health, safety, and academic achievement. The American Academy of Pediatrics strongly supports the efforts of school districts to optimize sleep in students and urges high schools and middle schools to aim for start times that allow students the opportunity to achieve optimal levels of sleep (8.5–9.5 hours) and to improve physical (e.g., reduced obesity risk) and mental (e.g., lower rates of depression) health, safety (e.g., drowsy driving crashes), academic performance, and quality of life.

Early studies addressed a core question: “Does delaying start time result in students obtaining more sleep or do students just stay up later and thus negate the effects of the delayed start time?” Wahlstrom et al assessed more than 18 000 high school students in Minneapolis before and after the district’s school start time changed from 7:15 AM to 8:40 AM beginning with the 1997–1998 school year. Bedtimes after the change were similar (ie, did not shift to a later time) to those of students in schools that did not change start times, and, as a result, students obtained nearly 1 additional hour of sleep on school nights during the 1999–2000 school year. (AAP 2014 p. 644)

The results from this three-year research study, conducted with over 9,000 students in eight public high schools in three states, reveal that high schools that start at 8:30 AM or later allow for more than 60% of students to obtain at least eight hours of sleep per school night. Teens getting less than eight hours of sleep reported significantly higher depression symptoms, greater use of caffeine, and are at greater risk for making poor choices for substance use. Academic performance outcomes, including grades earned in core subject areas of math, English, science and social studies, plus performance on state and national achievement tests, attendance rates and reduced tardiness show significantly positive improvement with the later start times of 8:35 AM or later. Finally, the number of car crashes for teen drivers from 16 to 18 years of age was significantly reduced by 70% when a school shifted start times from 7:35 AM to 8:55 AM.

Student health is a priority for our district. Over the past several years community feedback has compelled us to prioritize the social-emotional health of our students. This was the second largest concern shared in conversations that included about 1,750 stakeholders. (The largest concern was community growth.) Limited district resources are also a factor in meeting the recommendations research offers about how to best support our students. Our district has a finite number of buses and bus drivers. We have been experiencing a bus driver shortage. Due to these constraints, we cannot transport all students to school at the same time. Students are transported in shifts to maximize the efficiency of buses and drivers.

The Citizens Advisory Committee recommended students start later than the current 7:40 AM start at Camas High School. This CAC Start Time Summary Report – April 2017 shares more about the process and research that led to the committee’s recommendation. They proposed doing this in two different ways, pushing back all school start times or flipping elementary and secondary start times in some way.

Based on that recommendation, our district staff developed two schedule proposals. We shared these two possible new schedules with students, staff, and parents for consideration and feedback. We recognize that any kind of change is significant and impacts everyone. We also want to create the best possible conditions for our students to learn.