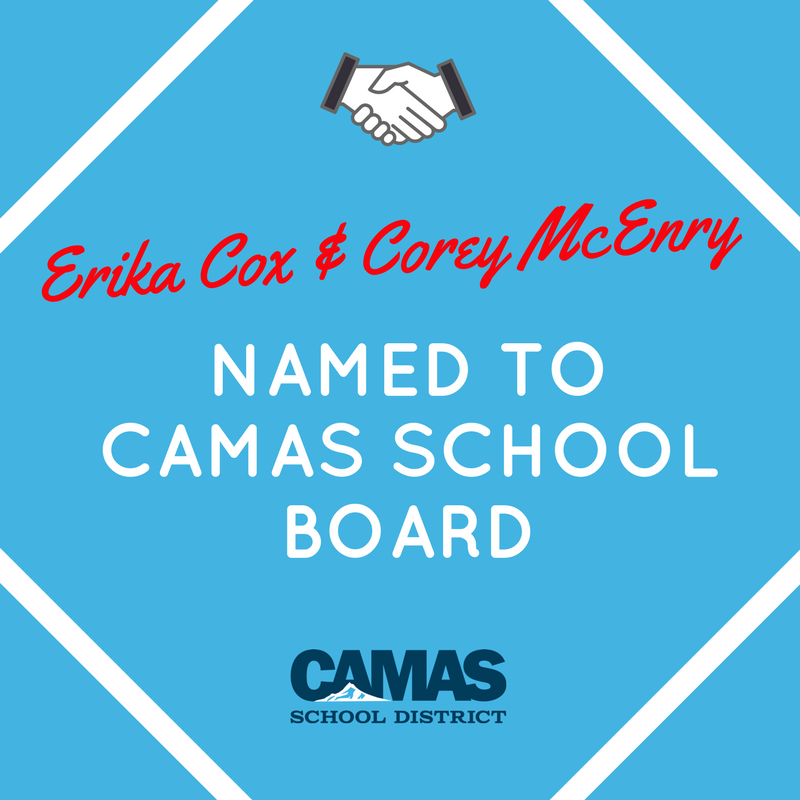 Longtime Camas community members Corey McEnry and Erika Cox were appointed Monday to the Camas School Board of Directors, filling the vacancies in Districts I and IV respectively, which were left open when Casey O’Dell and Julie Rotz resigned in February.

McEnry, a third-generation Camas High School alum, is a National Board Certified Teacher and works as the band director for Hockinson High School. He has served as vice-president of the Hockinson Education Association and as a committee member of the Hockinson Facilities Planning Committee as well as the citizens’ bond committee. McEnry earned his Bachelor’s degree from Western Washington University and his Master’s degree from Sam Houston State University.

He told the Board in an interview that he was interested in serving on the Board because he is proud of the education he received in Camas.

Cox and her family moved to Camas in 2005 when she immediately joined the Prune Hill Elementary PTA as president at back-to-school night. She continued her PTA service on executive Boards at Dorothy Fox Elementary and Skyridge Middle School. She served as president of the Camas Educational Foundation, volunteered on the district’s Citizens Advisory Committee, and currently is chair of the Salary Commission Board for the City of Camas. Cox earned her Bachelor’s degree in political science from Oregon State University.

Cox believes our district’s most significant challenges will continue to be funding and determining impact of the McCleary decision, managing growth, working to support student wellness, and finding ways to build on seeing and serving each student.

“I am the daughter of two educators, and my passion and commitment is education,” Cox stated during her interview. “I look for ways to give back to my community and am excited to be a part of shaping the future for Camas students.

Board President Doug Quinn indicated all the applicants for the positions were incredibly well qualified and thanked them for participating in the process.

“We have been fortunate to have a long history of strong board leadership in the Camas School District, passionate and talented individuals, committed to serving our community as a collective board,” commented Superintendent Jeff Snell. “I am excited for Erika and Corey to join the board and continue to that legacy.

Both Board members will run to keep their appointments in the general election in 2019. If successful, they’ll then complete the terms on the Board which end in December 2021.

Current Board members voted unanimously for each appointment.