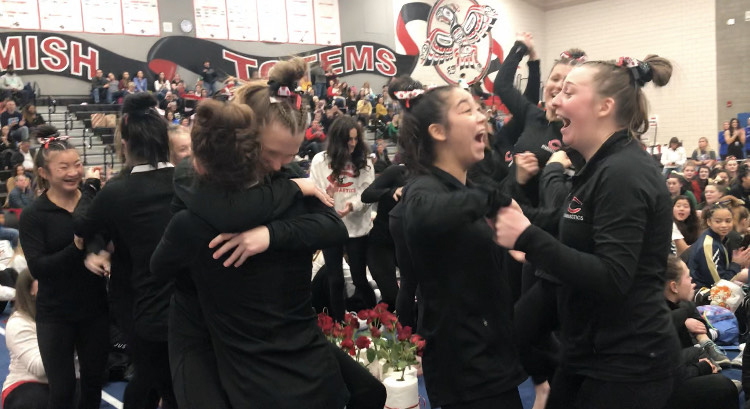 BELLEVUE — Make room for another spot in the Camas High School trophy case.

The Papermakers made it three consecutive Class 4A state gymnastics team titles Friday night at Sammamish High School, fulfilling their long-standing goal on the season.

And by doing so, the gymnastics team become Camas’ first sport to win three consecutive titles.

Motivation is what fueled the Papermakers, Alyssa Shibata said.

“It’s wild,” the junior said. “Our whole goal going into it was a three-peat — to come out stronger and better, and I think we did. We did amazing today.”

That was the second-highest of the day behind Rylye Anderson of Puyallup, the 4A all-around champion. McGee had the day’s best score on beam (9.600).

Before three years ago, no Class 4A school from Clark County won a state title. Camas won the program’s first state title in 2018 — the area’s first Class 4A title and first since Columbia River won the 3A/2A title in 2009 — dethroning four-time reigning state champion Woodinville at the Tacoma Dome Exhibition Hall.

Then it won it again in 2019 — the first year at Sammamish High School — behind the third-highest team score in 4A meet history.

Then came Fridays feat. And after watching her team’s performance on a third title, the Papermakers can’t help but look into the future. Club gymnasts are starting to take notice of Camas’ reign of success, Shibata said, which may spark more trophies in the future. Of the 16 gymnasts on Camas’ state roster, it loses four.

“We’re strong,” Shibata said, “and I think that’s good. We have so many options and so many good people around. We’re very blessed that way.”

Skyview coach Alyssa Loomis was named coach of the year by the state’s coaches association.